What is Video Bitrate, and How Does it Affect Video Quality? 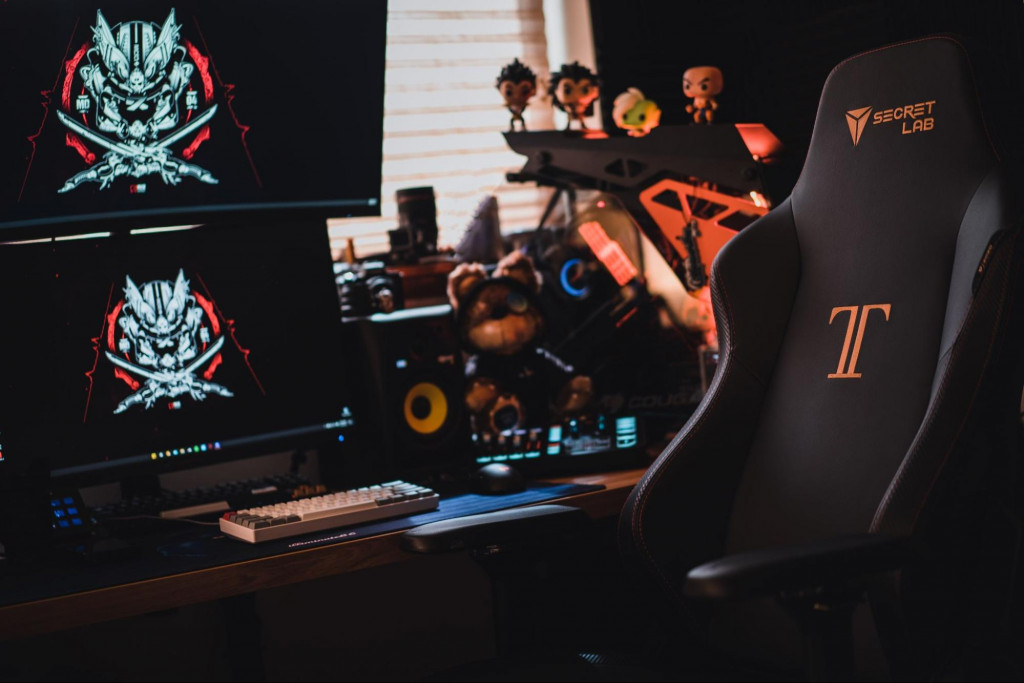 There are many factors that come into play when creating a great live stream. Offering a great personality, identifiable brand, and good gameplay is all extremely important, and you probably won’t find much success on the platform without them.

However, before you should even start to worry about the above-mentioned factors, you need to first ensure that all of the technical parts of your stream are taken care of. A reliable internet connection paired with a PC and a bit of technical prowess are absolutely essential for every streamer, as these are needed in order to have a smooth video feed while streaming on Twitch.

It’s also essential that you choose a platform that enables you to create and stream content that looks awesome. Studio 2, Lightstream’s latest offering, ranks high among the ones that you could try out. It’s easy to get started with and doesn’t compromise on the quality of your stream.

Having fast internet speed that allows for a high-quality video broadcast on your PC is mandatory, as viewers are more likely to watch your stream if you have a solid connection that offers great video quality. But in order to do so, you must have a good bitrate. In today’s post, we’ll be focusing on what video bitrate is, how it is measured, and more.

What is Video Bitrate? 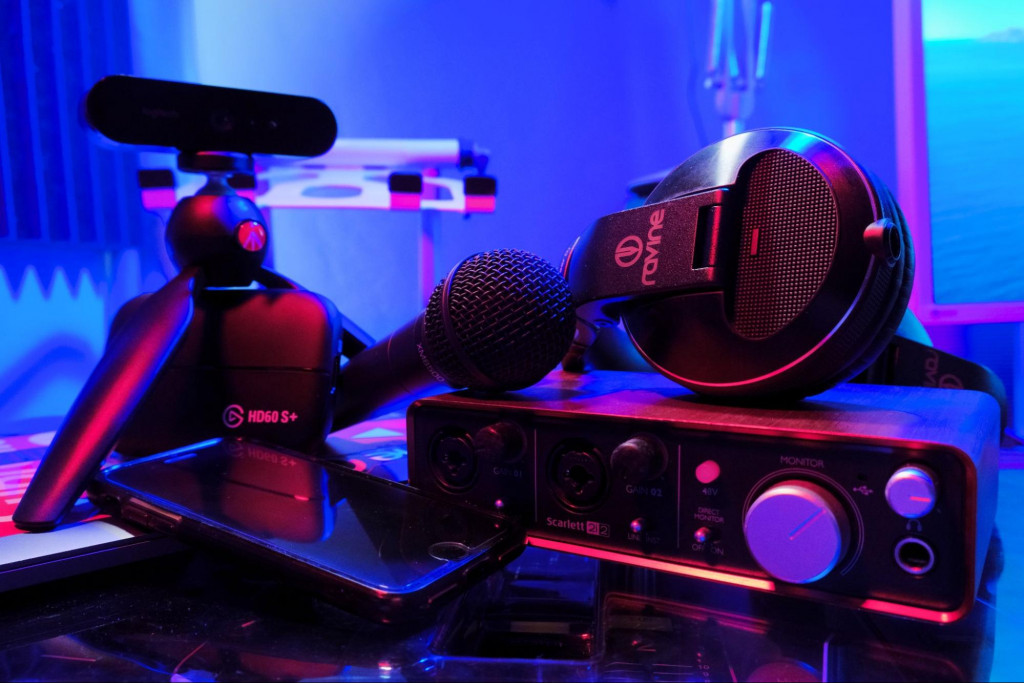 Video bitrate is essentially any video data that is being transferred at any given moment. A high bitrate is essential for streamers, as it is what defines the quality of a video. Bitrate is a measurement of the amount of data used to encode a single second of video.

When on the subject of video in broadcasting, data transmission is explained through both uploads and downloads. Uploading refers to data that’s transferred from your device to the web after the video signal is sent between the encoder for data compression. Meanwhile, downloading refers to the process of users receiving the video to their devices from the web.

Whether we’re referring to upload or download speed, both are measured using bitrates. Higher transfer speed involves more data to pass through, whereas higher bitrate results in better quality video. For example, a bitrate of 6000 kbps would result in excellent video quality for a video stream set to 1080p resolution at 60 fps. On the other hand, a video with less than 3000 kbps bitrate would be of very low quality, even if at 720p resolution or less.

How is Video Bitrate Measured?

Two important terms that are often confused are “Mbps” and “MBps.” Megabits (Mbps) per second refers to the uploading and downloading speed, while megabytes (MBps) per second defines the amount of info that is transferred.

How Does Bitrate Affect Video Quality? 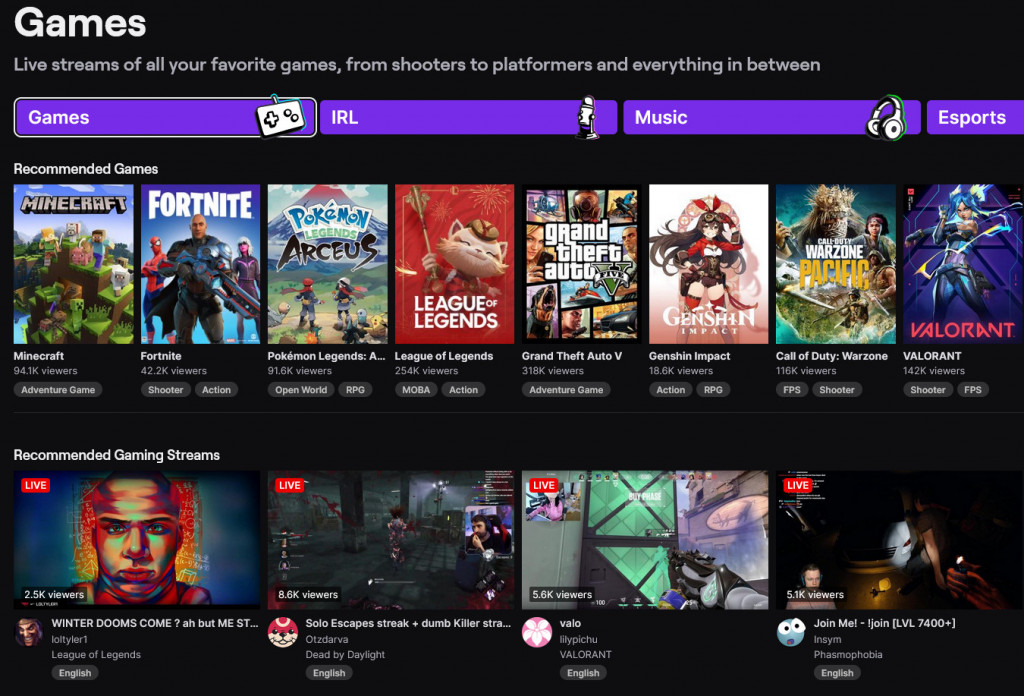 As one might expect, a higher bitrate improves the quality of a video. Higher bitrate correlates with higher image quality, while lower bitrate results in a lower quality.

Twitch streamers want to strive for a higher bitrate, as it means that their stream’s video quality will be better. While the content of a stream is incredibly important, visual image quality plays a big role as well. Just how most movie watchers would rather watch a Blu-Ray film over a VHS tape, Twitch viewers would much rather watch a streamer with sharp video quality over one with a blurry, low-quality image.

It’s important to also recognize that in order to obtain a higher resolution and frame rate while streaming, you must have a high bitrate that is able to properly match it. Streaming at a high frame rate and resolution with a poor bitrate may result in a stream riddled with freezing, stuttering, or even crashes.

Twitch limits all uploads to 6000 kbps, so if you’re able to achieve this bitrate or more, then you should have no issue. If you happen to have slower internet speeds and cannot reach this bandwidth, then there’s no need to worry.

Twitch has shared their settings and requirements for video streaming so that users can see exactly what their bitrate should be for their given resolution and framerate. Thankfully, the streaming requirements are quite low, so most folks should be able to stream with a satisfactory video quality level.

Seeing as the current standard for YouTube videos 1080p resolution, the best bitrate setting is at least 8 Mbps. This is very achievable nowadays, as most internet providers offer internet speeds even higher than that bitrate. 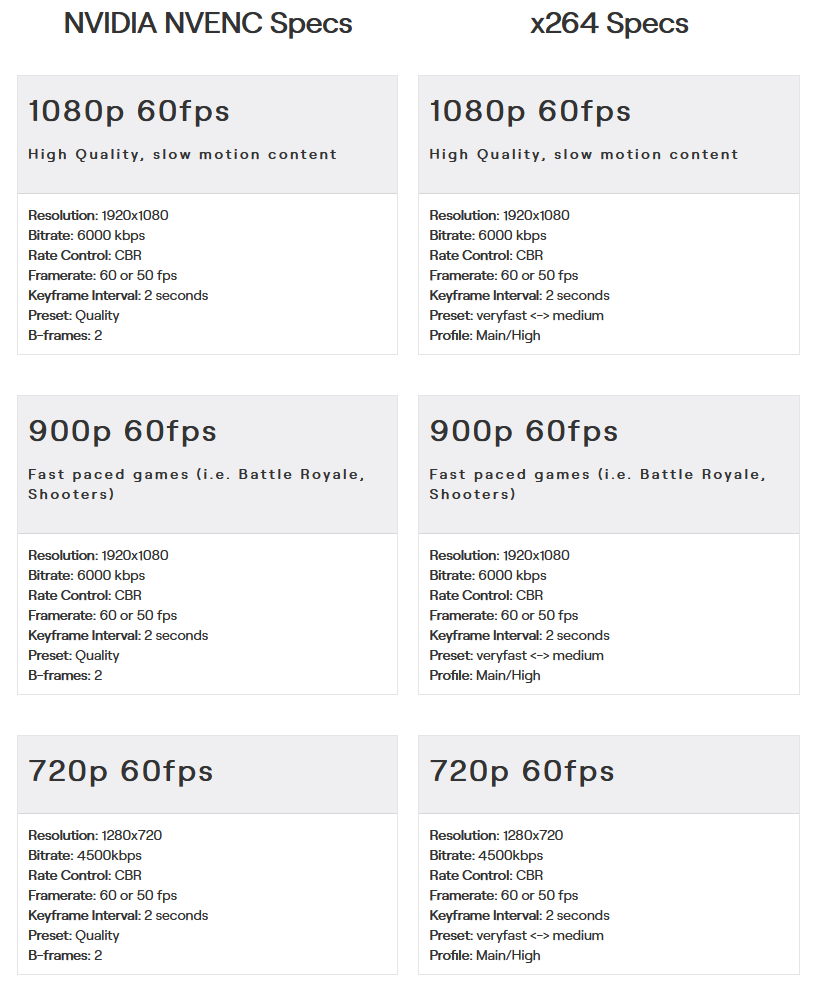 Twitch breaks down their streaming requirements on their site, stating how high a bitrate is needed in order to stream at a desired resolution and frame rate. Users streaming at 1080p 60fps should have a bitrate of 6000 kbps, while users with bitrates as low as 3000 kbps can still stream perfectly at 720p 30fps. Check out Twitch’s support page for a full breakdown.

Nvidia Nvenc refers to GPU usage for streaming, while x264 is in reference to streaming that utilizes the processor, or CPU. Both are viable options for streaming, though users who want to put less strain on their graphics cards may want to utilize their CPU instead.

Yes, high video bitrate equates directly to higher video quality – to an extent. Bitrate contributes to how high quality a video is, in relation to the resolution and frame rate settings of a video. As explained earlier, higher resolution videos running at a higher frame rate demand a higher bitrate in order to maintain smooth playback.

A high bitrate will guarantee that a video running at a high resolution and fps will be smooth, but lower resolution videos will continue to look poor, no matter how high the bitrate is.

So essentially, the bitrate will improve a video’s quality, but only to a certain extent. In order to get video quality as high as possible, bitrate, resolution, and fps must all be balanced.

What is the Video Bitrate Calculator? 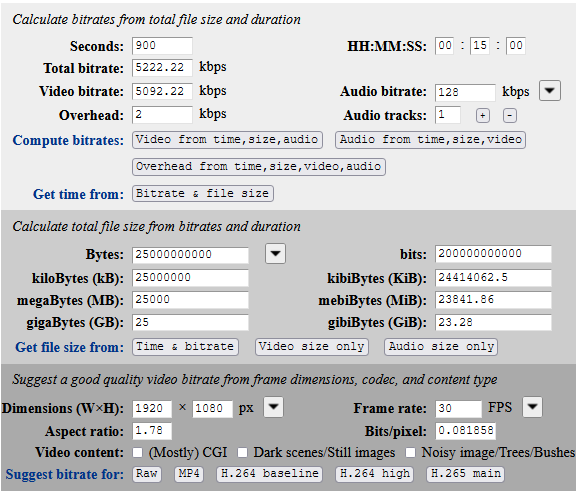 If you’re currently working on getting your stream up and running and want further assistance with your bitrate settings, then feel free to check out the video bitrate calculator. This is a tool that will tell you what you should set your bitrate settings to for encoding videos, live streaming, and more.

For example, we used the calculator to estimate how high of a bitrate we would need to encode a video. For our settings, we inputted that the video was 15 minutes long (900 seconds), had 1080p resolution, and ran at 30 fps. As a result, the video bitrate calculator told us that we should have the bitrate of at least 5222 kbps, which seems about right.

Hopefully, this guide has been helpful to you. Live streaming is a ton of fun, but it can also be a huge challenge to set up properly. Dealing with all of the technical mumbo-jumbo is one of the most frustrating parts of starting on Twitch, so we hope that we’ve made the process as simple as possible for you. We wish you the best of luck with your streaming endeavors, and to always remember to have fun with it!

Now experience the most popular streaming platform in the world at absolutely no-cost! All you need to do is register for our free gamer trial subscription by clicking the link below. Get the ball rolling today!