**Updated at 5pm PT**
Jump directly to the updated comparison.

Ninja shocked the gaming world yesterday when he announced he’s leaving Twitch to stream exclusively on Mixer, Microsoft’s live streaming platform. As one of the largest streamers on the largest gaming live streaming site, many see it as a pretty big shake up and an opportunity for Mixer to make up some ground. Will his viewers follow him over to Mixer, or be hesitant to venture from Twitch and find other broadcasters to watch instead?

Today is his debut stream on Mixer and we’re curious:
How does Ninja’s debut Mixer stream compare to his viewership on Twitch? 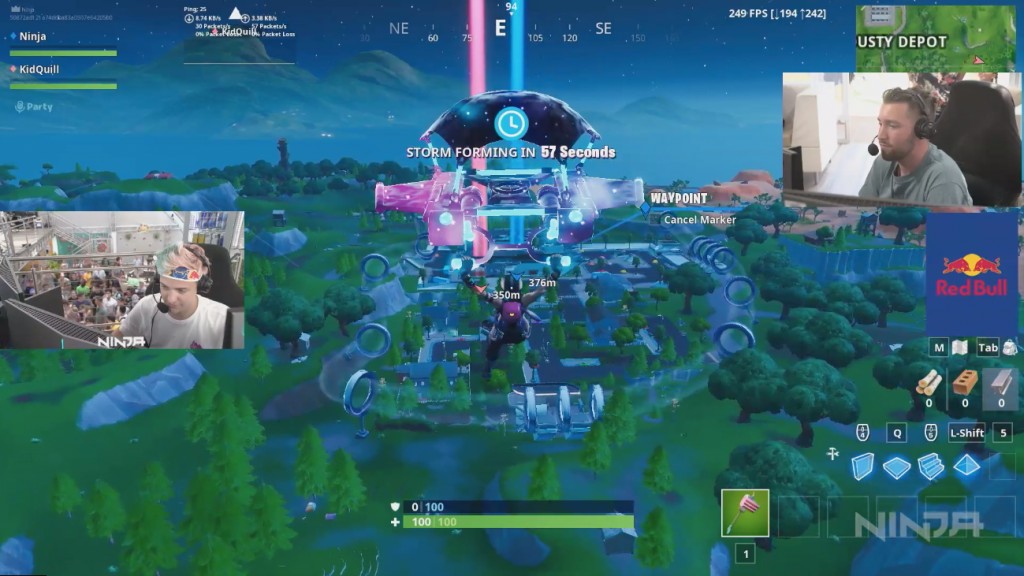 Expectations are high for Ninja’s first stream on Mixer. Going live from Lollapalooza definitely adds some energy from the crowd. Many are curious, will there be any major changes from his content on Twitch? Will he be utilizing any features that are exclusive to Mixer?

Ninja is live as I’m typing this. We’ll update as the stream continues. But as of 1pm PT, here’s how things are looking.

Over 54,000 average viewers is pretty significant for an individual streamer’s channel.

**UPDATE 3pm PT** Hit his stride around 1:40pm, topping out at 93,148 concurrent viewers. Really brought the average up as well.

So let’s get into the main question here – how does this compare to his numbers on Twitch?

**UPDATE 5pm PT** Was pretty consistent most of the afternoon, this is the first sign of things slowing down. He’s been playing some solos to pass time between tournament matches, expecting things to pick back up when the stakes are a bit higher.

So let’s get into the main question here – how does this compare to his numbers on Twitch?

As the end of his time at Twitch was during the Fortnite World Cup, we’ve ignored the replays of that event, and jumped straight to his last few solo streams that are more in line with his regular content.

Impressive numbers for sure! Let’s average these out and see how they compare (so far):

Note about stream duration: Twitch streams averaged around 6 hours per stream. The Mixer debut stream has been running a bit longer going on 7+ at this point.

Off to a strong start! Of course with all the hype and coverage the announcement has received it’s expected this first stream will get larger than normal viewership. There was a large uptick around 1:40pm PT that lead to peak viewership and really driving up the average. By 5pm PT concurrents dipped a bit, bringing the average down slightly (but keeping really close to the 63,232 tabulated at 3pm).  We’ll continue updating over the course of the day. Will be interesting to see where things settle and what channel growth looks like over the next few months.

Personalize your Xbox live streams to Mixer without a capture card or high-end PC.

More from Ryan Forquer
We use cookies on our website to give you the most relevant experience by remembering your preferences and repeat visits. By clicking “Accept All”, you consent to the use of ALL the cookies. However, you may visit "Cookie Settings" to provide a controlled consent.
Cookie SettingsAccept All
Manage consent